Last week, in (part I) of this blog mini-series, I discussed why BlockBlock required processes creation notifications, and one way to achieve this via a kext. Specifically, the blog post showed a MAC policy could be registered that would receive notification whenever a process was started.

Once I posted the blog, the venerable @osxreverser and others (mahalo Simon!), were kind enough to reach out to me to mention that such process monitoring could equally be achieved via the Kernel Authorization (KAuth) subsystem. As the KAuth interface is a more stable API than the MAC framework (which is 'unsupported' by Apple), I decided to explore this option.


Kernel Authorization (KAuth) Subsystem
Before getting into the details of the KAuth subsystem, its API, and how to monitor process creation; a few brief statements to summarize my explorations about the KAuth: ...it should noted that to OS X kext programmers, none of these statements are likely new!

Alright, so KAuth. Detailed in Apple's Technical Note TN2127, the KAuth subsystem "exports a kernel programming interface (KPI) that allows third party kernel developers to authorize actions within the kernel [and] can also be used as a notification mechanism." For the purposes of BlockBlock and monitoring process creation, we're only interested in the notification abilities of the KAuth subsystem.

The Technical Note provides a somewhat comprehensive overview of 'Kernel Authorization', so we won't dive into to many details. However, it's worth recognizing a few key concepts and terms:
With a decent understanding of the KAuth subsystem, it's fairly easy to write a kext that can receive most process creation notifications in two easy steps. If you'd like to follow along in code, download the source for the kext as an Xcode project.


Implementation Step 1: Register A Listener
The kauth_listen_scope function allows one to register a listener for a existing scope. Its prototype is as follows:

The first parameter ('identifier'), is the name of the scope the kext is registering for (e.g. KAUTH_SCOPE_FILEOP).

The second parameter ('callback'), is the address of the kext's callback function that will be automatically invoked by the KAuth subsystem whenever a event (that matches the scope) is generated.

The third parameter ('idata'), is a cookie or 'refCon', for the callback. For purposes of monitoring process creations, utilization of this parameter is not needed.

The value returned by the call to kauth_listen_scope, is a kauth_listener_t. Save this, so that the listener can be unregistered when the kext is unloaded.

Let's look at the first two parameters a little closer.

As mentioned, the first parameter is scope of interest. Scopes are defined in sys/kauth.h as well as Technical Note TN2127.

The first parameter of interest is the 'action' parameter. This, as previously mentioned, is the operation within the (KAUTH_SCOPE_FILEOP), scope. As the kext is only interested in the KAUTH_FILEOP_EXEC action, the rest can be ignored:
//call back function for file ops
// ->only care about KAUTH_FILEOP_EXEC
static int processExec(kauth_cred_t credential, ..., kauth_action_t action, ...)
{
...

In other words, within the callback (which is automatically invoked anytime a process is created), the code has access to process's path. Combined with the pid, ppid and uuid, (which are all equally accessible), the information that BlockBlock required, is can be provided.


Compiling and loading this kext (see the previous blog post for details on this process), illustrates that yes, process notifications are received and output by the kext. Hooray!

KAuth vs. MAC
The previous blog post illustrated how process notifications could be received via a MAC policy. And now, we've shown how to accomplish the via a KAuth listener. So which method should be selected? Well, as KAuth is a supported and documented (read: the legitimate) subsystem, is seems the obvious choice. However, MAC policies may be more powerful, and allow one to more comprehensively track process creations. How so? Well the following stackoverflow post explains:

"KAUTH_VNODE_EXECUTE [and KAUTH_FILEOP_EXEC] isn't quite sufficient for all processes; this won't catch processes which are fork()ed without exec(). Fairly rare on OSX, but not unheard of." 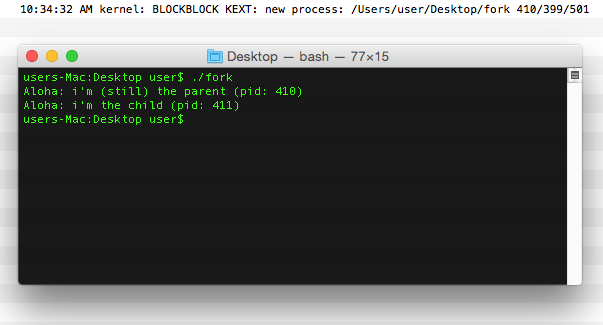 The same stackoverflow post mentions, "There is a MAC framework policy callback for fork." And indeed there is: mpo_proc_check_fork

So, if a kext makes use of the MAC framework and registers for this notification, it will received notification of fork() attempts. It should be noted that this notification will be delivered before the fork() as completed. Thus the child's pid will not (yet) be accessible. However, the path will be known, as it the same as the parent, until the child execs (which should generate a mpo_vnode_check_exec or KAUTH_FILEOP_EXEC event).

Conclusion(s)
To summarize; the simplicity and interface stability of the KAuth subsystem, make it a great way to track process creations in the kernel. However, if one needs to also track process that fork(), but don't exec(), using the MAC framework may be the way to go.

Next up (part III); how the process information, captured in by BlockBlock kext, is made available to user-mode, by means of a broadcast to a system socket. Check back shortly for that new (part III), blog post!