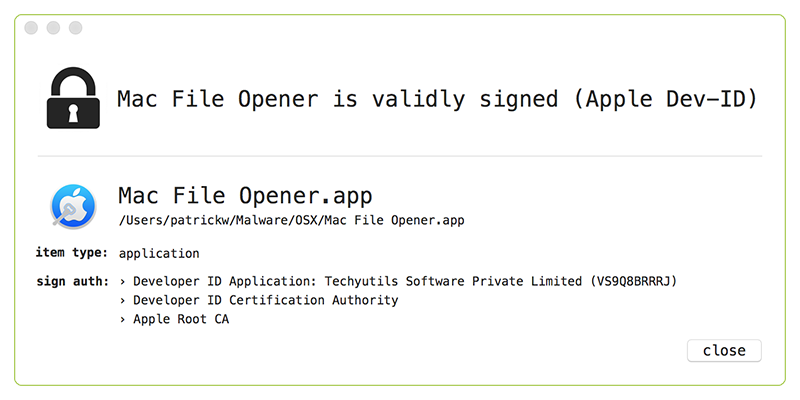 Packaged in an 'Advanced Mac Cleaner' installer, Thomas noted that this malware is a fairly standard 'run-of-the-mill' adware, save for way it attempts to gain execution:

"Even more intriguing, this app didn't have any apparent mechanism for being launched. It hadn't been added to my login items. There wasn't a new launch agent or daemon designed to load it. It simply seemed to be sitting there, doing nothing."

Digging deeper, he discovered that this malicious application (by means of its Info.plist file) registers itself as the 'document handler' for a myriad of file types. In his words:

"Essentially, what this app had done is set itself up as an app that can open most files that are at all likely to be on the typical user's system. Worse, if there is no other app to open a specific file, this app would be the default. It turns out that this is exactly what that app wants, and it takes full advantage of that fact."

Since this mechanism requires a user launch an application that previously didn't have a default 'document handler' and matches one that 'Mac File Opener' registered for, this is somewhat of a 'unreliable' persistence mechanism. However, the upside to this method is that it will 'bypass' tools such as BlockBlock that monitor for true persistence mechanisms (i.e. ones that require no user interaction, instead are automatically executed each time the system is rebooted or the user logs in).

Regardless I was intrigued by this novel approach, so decided to perform a technical deep dive into the concept "document handlers," how an application can register as a 'document handler' for a file type, and what goes on behind the scenes to make this all work.

This blog is summary of my (hopefully accurate!) investigate findings into all of this. We'll describe [part 0x1] Application: "I'll handle that!"
The concept of 'document handlers' is simple. In short, applications can register with the OS to handle various document or file types. Then, when the user double-clicks such a file to open it, the OS will automatically launch the registered application. This is why opening an HTML file launches the default browser, while double-clicking on a .psd file opens Photoshop. As Thomas pointed out in his writeup, "One of the things that file Info.plist does is allow the developer to identify what file types the app is capable of opening, using an array of data given the key 'CFBundleDocumentTypes' that defines all the file types."

Let's create a simple application to test this, and register the application to handle files of type .bar. The goal is to have the OS automatically launch our application when the user attempts to open a file such as foo.bar.


As described in Apple's documentation, to register as 'handler' for a certain document type, one can simply create a 'Document types' ('CFBundleDocumentTypes') array in the Info.plist file:

This array should contain dictionaries for each document/file type you'd like the application to handle. Each dictionary effectively tells the OS, "aloha OS, if nobody else has registered for this type of file, when the user double-clicks such a file, launch me to handle it" ...or more formally Apple notes:

"CFBundleDocumentTypes (Array - iOS, OS X) contains an array of dictionaries that associate one or more document types with your app. Each dictionary is called a type-definition dictionary and contains keys used to define the document"

However, testing showed that claiming to be the 'Owner' for a common file type (e.g. .png), would not usurp the existing, registered handler (on my box, Preview.app).

Once the test application is compiled, if then we create a file of type .bar and attempt to open said file, the application is automatically opened! Success :)

Since we didn't have to manually tell the OS what file type(s) our application could handle (e.g. .bar files), obviously there is a lot going on under the hood! Time to get down and dirty :)

We know that an application specifies what document types it supports via its Info.plist file. Thus is seemed reasonable to watch file I/O events to see who, or what processed this file once the malware appeared. The assumption here was that some system component would automatically parse the malware's Info.plist file, and then register it for the 200+ document types it specified.


As the following shows, once the malware was downloaded, a process named 'lsd' opened and read (i.e. parsed) its Info.plist file.


However examining this framework reveals that the LS* related APIs are not implemented in CoreServices, but rather in LaunchServices framework.
$ otool -l /System/Library/Frameworks/CoreServices.framework/Versions/A/CoreServices

Remember, we're looking for logic that registers the malware and its 'document handlers' with the system. Thus it seems reasonable to start by examining functions or methods containing *register* or *registration*... such as _LSCreateRegistrationData and registerBundleRecord.


Looking at the stack trace, it was easy to see that lsd had received an XPC message to 'process' the malware by parsing its Info.plist file and register its 'document handlers.' This was confirmed by examining the values in various registers, which show the path to the malicious application:


As its name suggests, the _LSCopyBundleInfoDictionary method copies (or extracts) an application's Info.plist, including the 'document handlers' ('CFBundleDocumentTypes'):
[lldb] po $rax
{
...


The LSBundleRecordBuilder::registerBundleRecord method then invokes the _LSBundleAdd method which appears to extract various information from the malicious application bundle, such as its bundle id, display name, and path to its executable:
[lldb] po $rsi
com.pcvark.Mac-File-Opener


Following this, the LSBundleRecordBuilder::registerBundleRecord method invokes a method named _LSRegisterDocumentTypes. Not hard to guess what this method does! In short it appears to iterate over each item in the malware's Info.plist 'CFBundleDocumentTypes' array (extracted via the LSCopyBundleInfoDictionary method) and registers it with the 'LSDatabase'.
[lldb] po $rdi
{
...

Specifically it appears that helper functions (such as _LSBindingListCreate() _LSClaimAdd() _LSBindingListActivate()) are called by the registerBundleRecord method to interface with the database in order to insert pertinent information about the malicious application and its 'document handlers':
LSBundleRecordBuilder::registerBundleRecord(LSDatabase *, int *, unsigned char *) proc near

It this point I felt like I had decent understanding of how an application and its 'document handlers' are registered automatically with the OS. To summarize: As was previously shown, debugging lsd revealed the path (on my VM) to a persistent database:
/var/folders/np/85lyz_4545d5lz8wvy04xvlm0000gn/0//com.apple.LaunchServices-134501.csstore

Now let's look at how this information is used at runtime. That is to say, when a user double-clicks a file, how does the system interface with the launch services database to extract and launch the correct (if any) handler application.

[part 0x3] OS: "I'll launch the 'correct' application to handle that!"
During some previous research (which resulted in a few Gatekeeper bypasses!) I briefly dove into how OS X launches an application: 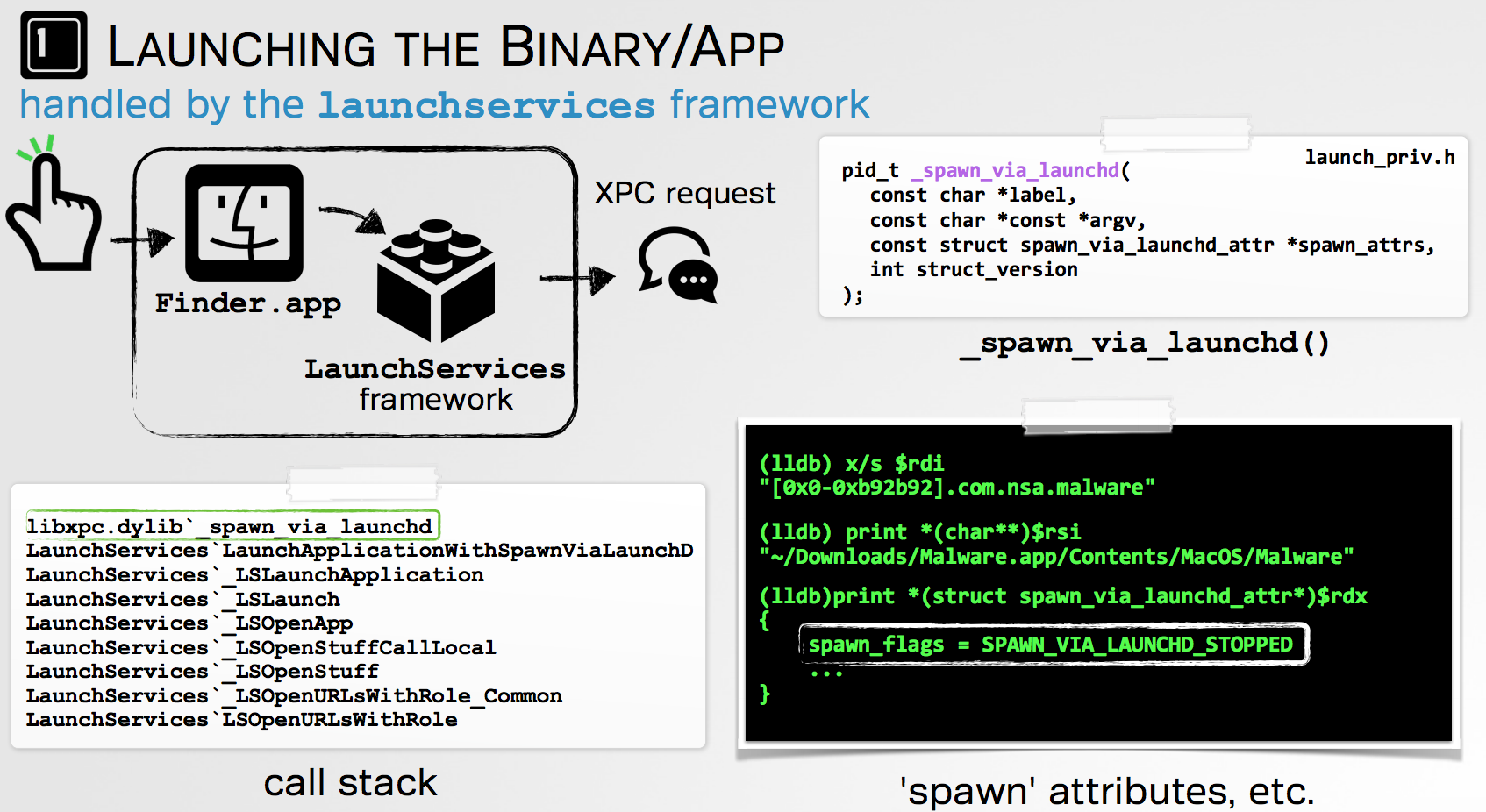 As the following image shows, when a user double-clicks a file or application, various methods within the launch services framework are invoked.

Attaching to Finder.app and setting breakpoints on these functions proved to be quite insightful - starting with the LaunchServices LSOpenURLsWithRole method.

Setting a breakpoint on the LaunchServices LSOpenURLsWithRole method shows that this method is invoked with the path of the item the user is attempting to open. Here; a .7z file (recall the 'Mac File Opener' advertised a 'document handler' for this document type):
[lldb] po $rdi
<__NSArrayM 0x7fd3b3f02d40>(
file:///Users/user/Desktop/out.7z
)


Dumping its arguments confirms that yes, the system has indeed resolved the malware as the 'document handler' for the .7z file the user was attempting to open.

In other words, opening any .7z file (or any other file the malware is a 'document handler' for), will cause the system to automatically execute the malware. And know you know exactly how :)

Conclusion
The most interesting aspect of the 'Mac File Opener' malware is certainly the way it attempts to be launched. By acting as a 'document handler' for over 200 file types - whenever a user launches one such file (assuming that no other application is already registered as the 'document handler'), the malware will be automatically executed by the OS. In this blog, we dug into how this registration process automatically occurs, and how, at runtime the system resolves the correct application to launch.

I'm on the fence whether KnockKnock should display all registered document handlers (currently it mostly just shows 'pure' persistence mechanisms - that is, ones that don't require user interactions). Thoughts?